LocationMile High Ballroom
DescriptionThe Gordon Bell Prizes have chronicled the important innovations and transitions of HPC beginning with the first award in 1987. Gustafson, Montry, and Benner demonstrated Amdahl's Law was not impenetrable. By 1994, MPI provided both a model and standard for rapid adoption, Beowulf became the recipe for building clusters, and a Thinking Machines cluster significantly outperformed the fastest Cray shared memory multiprocessor. The prize has recognized every gain in parallelism from widely distributed workstations to the Sunway 10 million core processor in 2016. The overlap from the Seymour Cray recipe of a shared memory, multi-vector processor (aka Fortran Computer) to today's multicomputer turned out to show up and be incredibly fast. Hopefully, the prize has helped the rapid adoption of new paradigms, e.g. GPUs and possibly FPGAs. The prize also recognized the value of specialized hardware. Finally, the prize recognizes the tremendous effort and creativity required with algorithms, computational science, and computer science to exploit the increasingly parallelism afforded by the computers as seen in the increase in number of authors.
Presenter 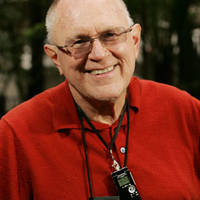