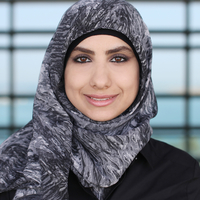 Biography
Dalal Sukkari is a fourth-year PhD candidate in Applied Mathematics and Computational Science at KAUST. Her research centers on a new high performance implementation of the QR-based Dynamically Weighted Halley Singular Value Decomposition (QDWH-SVD) solver on multicore architecture enhanced with multiple GPUs. She has introduced a high performance QDWH-SVD implementation on distributed memory based on the state-of-the-art vendor-optimized numerical library ScaLAPACK, and has presented the first asynchronous, task-based formulation of the polar decomposition QDWH and its corresponding implementation in the context of the Chameleon library with the dynamic runtime system StarPU on various architectures. She has presented at conferences and published in each of these areas including a Best Paper at Euro-Par 2016. She received her MSc degree in Applied Mathematics from KAUST in July 2013 with Dean’s Academic Excellence Award. Dalal hails from Jordan, where she earned her BS in Applied Mathematics from Hashemite University of Jordan, Amman, in 2008.
Presentations
Workshop
Five-minute presentations by young researchers from around the world - part 2