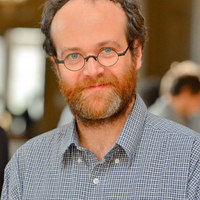 Biography
Martin Quinson is a Full Professor at ENS Rennes since 2015. He obtained a PhD in computer science Ecole Normale Supérieure of Lyon in 2003 and did a post-doc at University of California, Santa Barbara in 2004. From 2005 to 20015 he was Tenured Associate Professor at Université de Lorraine, and member of the LORIA laboratory. He obtained his Habilitation from Université de Lorraine, in 2013.
From 2013 to 2015 he was team leader of the joint team ALgorille common with Loria and Inria Nancy.
His research is on design and performance evaluation of distributed algorithms and applications
in the contexts of High Performance Computing and Grid Computing. To this end, he uses several ap-
proaches: direct execution on experimental grids (such as Grid’5000), emulation, simulation (through the SimGrid project), and formal methods. He (co-)authored one book chapter, 6 journal articles, more than 20 papers in international conferences. Apart from teaching and research he is also involved in scientific popularization.
Presentations
Workshop
Verifying MPI Applications with SimGridMC