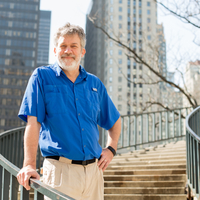 Biography
Charlie Catlett is the founding director of the Urban Center for Computation and Data, UrbanCCD, which brings social, physical, and computational scientists together with artists, architects, technologists, and policy makers to explore science-based approaches to opportunities and challenges related to the understanding, design, and sustainable operation of cities. To this end UrbanCCD brings expertise, tools, and resources to bear from computational modeling, data analytics, and embedded systems. He is also a Senior Computer Scientist at Argonne National Laboratory and a Senior Fellow at the Computation Institute of the University of Chicago and Argonne National Laboratory.

From 2007 to 2011 he was the Chief Information Officer at Argonne National Laboratory, and from 2004 to 2007 he was Director of the National Science Foundation's TeraGrid initiative - a nationally distributed supercomputing facility involving fifteen universities and federal laboratories. From 1999 to 2004 Charlie directed the design and deployment of I-WIRE, a dedicated fiber optic network funded by the State of Illinois, which connects research institutions in the Chicago area and downstate Illinois to support advanced research and education.

Before joining the University of Chicago and Argonne in 2000, Charlie was Chief Technology Officer at the National Center for Supercomputing Applications at the University of Illinois at Urbana-Champaign. Beginning at NCSA’s founding in 1985 he participated in the development of NSFNET, one of several early national networks that evolved into what we now experience as the Internet. During the exponential growth of the web following the release of NCSA’s Mosaic web browser, his team developed and supported NCSA’s scalable web server infrastructure.

Recognized in 2014 as one of Chicago’s “Tech 50” technology leaders by Crain’s Chicago Business, Charlie is a Computer Engineering graduate of the University of Illinois at Urbana-Champaign.
Presentations
HPC Connects Plenary
HPC Connects Plenary: The Century of the City