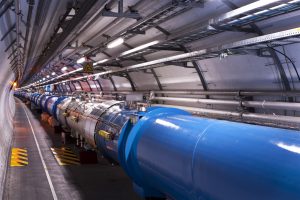 Explore inside the world’s largest particle collider in Switzerland via the world’s fastest network – SCinet- at SC17 in Denver. Photo by Maximilien Brice – https://cds.cern.ch/record/1211045

It feels like science fiction. You’re a subatomic traveler inside the world’s largest particle collider in Switzerland. You’re not only watching collision events and seeing particle tracks and electrons, you’re also moving around inside the collision and questioning objects that tell you their properties.

But it’s not fiction. You’re in Denver wearing a virtual reality headset and navigating with hand controllers inside a reconstructed event at the CERN Large Hadron Collider.

That’s just one of the Network Research Exhibition (NRE) demos at SC17 made possible in part by SCinet, the high-capacity network built each year to support the revolutionary applications and experiments that are a hallmark of the SC conference.​ SCinet is deployed not only on the SC17 showfloor but on multiple SCinet 100 Gbps WAN paths throughout the United States, which connect to additional 100 Gbps extensions worldwide.

Yet another demo seeks to set a record for software defined optical networking, while another will demonstrate virtual forwarding contexts (VFC) that will transform a hardware platform into multiple virtual switch instances with boundaries that prevent interference.

The CMS.VR project provides an interactive virtual reality experience inside high-energy  proton-proton collisions in the CMS detector at the CERN Large Hadron Collider near Geneva, Switzerland. The project team seeks to make the simulation comfortable, engaging and easy to use for first time casual users.

It will also be extensible and technically featured for expert users. The VR team includes the California Institute of Technology (Caltech), NovaVR LLC, CERN, the Fermi National Accelerator Laboratory (Fermilab), the University of Notre Dame in Indiana and the University of Bristol in England.

The Open Commons Consortium (OCC) will demonstrate how 100 Gbps networks can be used to interoperate storage and compute resources from physically separate NOAA and NASA data commons for environmental data. The two commons will peer with each other enabling a researcher to find and access data in either commons in the same way, independent of the commons geographical location and at no cost. The OCC team includes the University of Chicago and Northwestern University, NOAA and OCC.

The Corsa Network Hardware Virtualization demo will provide network researchers with programmatic control of their own isolated, OpenFlow-based switch virtual forwarding contexts (VFC).  It will demonstrate and enforce boundaries between the SCinet NOC administrative domain and a user’s administrative domain.  Metro and WAN network architects and operators will show how they can slice network hardware into virtual switching and routing instances with internet scale throughput.

Whether your interest is in particle physics, environmental data, record breaking data transport or virtualization, there are one-of-a-kind NRE demos to see and experience at SC17, and these are just four of the many demos made possible in part by SCinet. Explore the full list here.