Everyone knows that computers have grown exponentially faster and more powerful. But only a few know exactly why and how – and Gordon Bell has been a sage among them since the 1960s as the former head of R and D at Digital Equipment Corp (DEC), establishing the minicomputer industry with the PDP and Vax computers

A globally recognized pioneer in the supercomputing world, Bell will be sharing his latest reflections and insights with his fellow scientists, engineers and researchers at SC17 in Denver on Tuesday, November 14th from 3:30pm-5pm in the Mile High Ballroom. 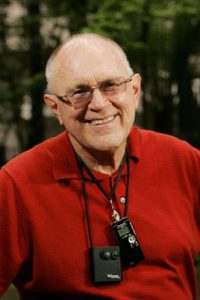 Bell will highlight the work of the winners of the ACM Gordon Bell Prize from the past 30 years. Presented by the ACM, the recipients’ achievements have chronicled the important innovations and transitions of high performance computing, including the rise of parallel computing, a computing architecture that breaks down problems into smaller ones that may be solved simultaneously.

This body of work also represents innovations in large-scale data analytics, data-gathering hardware and other improvements in computing state of the art. According to Bell, the prize has recognized every gain in parallelism from widely distributed workstations to China’s Sunway TaihuLight 10-million core system in 2016.

“We are honored to have the legendary Gordon Bell speak at SC17,” said Conference Chair Bernd Mohr, from Germany’s Jülich Supercomputing Centre. “The prize he established has helped foster the rapid adoption of new paradigms, given recognition for specialized hardware, as well as rewarded the winners’ tremendous efforts and creativity – especially in maximizing the application of the ever-increasing capabilities of parallel computing systems. It has been a beacon for discovery and making the ‘might be possible’ an actual reality.”

Bell is a researcher emeritus (ret.) at Microsoft Research. His interests include extreme lifelogging, preserving everything in cyberspace and Bell’s Law describing the birth, evolution and death of computer classes. He is a founding trustee of the Computer History Museum, Mountain View, CA.

Since 1965, Bell has evangelized scalable systems, starting with his interest in multiprocessors. In 1987, he led the cross-agency group as head of NSF’s Computing Directorate that made “the plan” for the National Research and Education Network (NREN), which came to be known as the Internet. Bell is a financial supporter for the ACM’s annual Gordon Bell Prize.