GPS tracks of motorists along the I210 corridor in the LA Basin.

Second, the talk presents algorithms to control transportation infrastructure assets (metering lights, traffic lights in the arterial networks, variable speed limits, etc.). These algorithms rely on adjoint-based optimization of PDEs in discretized form. Finally, we investigate disruptions in demand due to the rapid expansion of the use of “selfish routing” apps.

These disruptions cause congestion and make traditional approaches of traffic management less effective. Game theoretic approaches to demand modeling are presented. These models encompass heterogeneous users (some using routing information, some not) that share the same network and compete for the same commodity (capacity).

Results will be presented for static loading, based on Nash-Stackelberg games, and in the context of repeated games, to account for the fact that routing algorithms learn the dynamics of the system over time when users change their behavior. HPC implementations on the NERSC cluster at LBNL will be used to demonstrate the ability to scale up algorithms for the entire LA Basin or the City of Chicago, using a parallel version of the Frank-Wolfe algorithm. 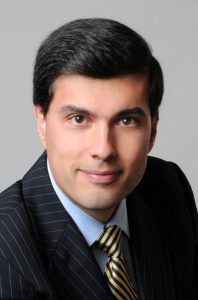 He received a BS from Ecole Polytechnique, France, and an MS and PhD from Stanford University. He has worked at NASA, and at the Department of Defense in France, where he holds the rank of Major. He has published two books and over 200 peer refereed journal and conference publications. His research has been covered hundreds of times in the mainstream media. He is the recipient of several awards, including CAREER (NSF), PECASE (White House), Ruberti Prize (IEEE), Huber Prize (ASCE), TRANNY (CTF) and Gilbreth Lecture (NAE).