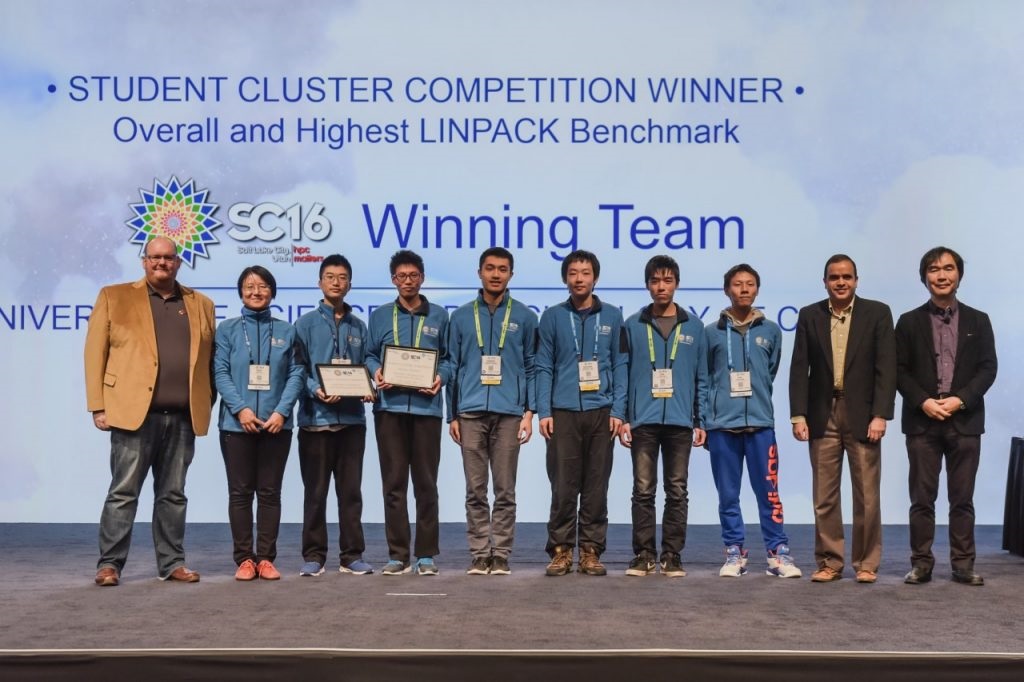 University of Science and Technology of China took top honors in the tenth running of the Student Cluster Competition at the SC16 conference.

This year’s competition to feature winning teams from events in U.S., China, Germany

When the SC17 conference convenes November 12 in Denver, sixteen teams of students will be on hand to compete in the Student Cluster Competition (SCC), now in its 11th year. The teams hail from across the U.S., as well as Asia and Europe.

The Student Cluster Competition is a high energy event featuring young supercomputing talent from around the world competing to build and operate powerful cluster computers. Created as an opportunity to showcase student expertise in a friendly yet spirited competition, the SCC aims to introduce the next generation of students to the high-performance computing community.

The number of teams selected for SC17 is the highest since the first event was held at SC07 in Reno, and the 19 reviewers sifted through 20 team applications, also the highest number to date.

“We want to expand the reach of the competition,” said SC17 SCC Chair Stephen Harrell of Purdue University. “In order to improve the competition we need to make it more competitive, as well as more available to a broader range of schools and teams. One of the ways we are working to do that is by bringing on more teams.”

The first SCC was held at SC07 in Reno, Nev., and over the years has spawned similar events in China, Germany and South Africa. One thing that differentiates the SC conference version is that the teams compete around the clock, while the others shut down overnight.

“I think competing around the clock is part of the fun of the competition,” said Harrell, who was the advisor for Purdue University teams that competed at four SC conferences, twice at the event in Germany and once in China. “There’s something special about being there after hours in the convention center, with your team as you go at it all night. I like how our competition has always had that edge to it.”

Getting accepted to compete is but one hurdle in the lead-up to November. The submitted proposals mostly focused on the computer architectures and many were produced by students in a class. Now the schools that were accepted need to select the six students who will make up each team, Harrell said.

And the proposed architectures can also change over the summer, with final specifications due in the fall.

A new wrinkle introduced at SC16 is the SCC Reproducibility Initiative. This component of the competition challenges students to reproduce a paper rather than run prescribed data sets. For this year, the SCC committee chose “The vectorization of the Tersoff multi-body potential: An exercise in performance portability” by Markus Höhnerbach, Ahmed E. Ismail and Paolo Bientinesi for the 2017 reproducibility challenge. One unique aspect of this paper is that it reports on optimizations for several hardware architectures.