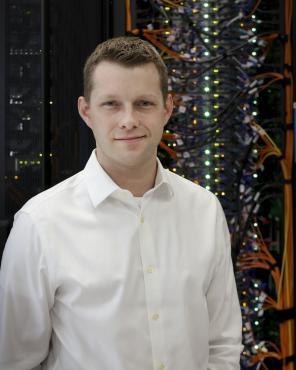 When Dustin Leverman was growing up, he likely didn’t imagine that his interest in machines would someday turn into a career at the Department of Energy’s Oak Ridge National Laboratory. But since childhood, he has been curious about how things work.

“When I was little, my dad would give me something like a flashlight, and when he wasn’t looking, I’d tear it apart and see if I could put it back together and make it work,” Leverman said.

By the time Leverman was 14, he dedicated much of his time to one endeavor: speeding up his parents’ old computer. Determined to complete the task on his own, he frequented a computer repair store until they offered him a job on his 15th birthday. That job would further increase his knowledge of computers, paving the way for a career in computing.

But Leverman’s career path wasn’t linear. When he started school at the University of Colorado–Boulder, he majored in electrical engineering. After two years in the program, he decided to pursue an economics degree instead.

While in school, though, Leverman found a job working at the help desk for the Laboratory for Atmospheric and Space Physics (LASP), a university department focused on space research. It was this job—not his degree—that led him to an unexpected career in high-performance computing (HPC) systems.

“My manager at the LASP help desk started a team to go compete for the first time at the SC07 Student Cluster Competition, and I ended up being team captain,” Leverman said. “While I was there, the National Center for Atmospheric Research, or NCAR, came by and asked if I was interested in an internship.”

His internship with NCAR’s future technology computing group lasted a little over a year. In 2009 he worked briefly for the National Oceanic and Atmospheric Administration, a US Department of Commerce agency, before accepting a position at ORNL the same year.

“HPC is a niche field, and one great aspect of the challenge is that it brings people into HPC that normally wouldn’t have been exposed to it,” he said.

Now, Leverman is the HPC storage system administrator for the Oak Ridge Leadership Computing Facility (OLCF), a DOE Office of Science User Facility located at ORNL. He spends his days assisting users with performance problems and ensuring reliability of the day-to-day operations of the file system, which contains information generated by the OLCF’s flagship supercomputer, Titan. He also serves as storage team leader—a position he thrives on because of his self-described “fastidious” nature.

“I think it’s pretty necessary to be detail-oriented when you’re a system administrator,” he said. “When there’s a problem, you have to follow it to completion and have detailed work. That way you don’t have stray hairs everywhere.”

This meticulousness, combined with Leverman’s ability to make his work fun, is what has made him successful thus far, he says.

UT-Battelle manages ORNL for the DOE’s Office of Science. The Office of Science is the single largest supporter of basic research in the physical sciences in the United States, and is working to address some of the most pressing challenges of our time. For more information, please visit http://science.energy.gov/. – By Rachel Harken.  This article is courtesy  of Oak Ridge National Laboratory.