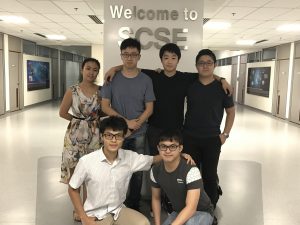 Competing for the first time at the SC SCC will be Team Enigma from Nanyang Technological University in Singapore. They chose their name because it encompasses the meaning of mystery as well as represents one of the biggest game changers in the development of computing – the drive by English researchers led by Alan Turing to break the secrets of the German’s Enigma encryption device.

Team Enigma hopes to gain an advantage over other teams by configuring their servers with general purpose high performance computing in mind, so as to perform well for the mystery application provided during the competition. “In addition, our servers have a uniform configuration to simplify management, this provides our team with an edge by allowing us more time to focus on optimizing our applications instead.”

The team, which will travel 20 hours to reach Salt Lake City, has also prepped their hardware. Once they received four workstations from their sponsors, “We did some manipulation on the servers under supervision. Especially for the cooling system, we brainstormed some ‘cool’ ideas to cool the hardware system in an efficient way.”

The team is looking forward to networking both with professionals in the fields of computer science and high performance computing, as well as their peers from other countries. “We believe that this is an excellent and rare opportunity for networking and we will definitely make full use of it.”

To both relax as they prepare for the competition and to practice teamwork, they like to play Foosball. The table-top game sport, loosely based on association football (soccer). Requires four people to play together.