For the first time, SC conference releases a comprehensive list of all Gordon Bell winners since 1987. Here is that historical perspective.

Each year at SC, two key indicators of HPC performance are highlighted. Both were created to provide a more accurate measure of overall performance than the theoretical peak performance levels sometimes touted by vendors.

As Alan Laub, who was the first head of the Department of Energy’s SciDAC program, once said, “Peak performance – the manufacturer’s guarantee that you can’t compute faster than that.” So, coming up with metrics that provide defensible results is critical.

One, the TOP500 list, details how fast the LINPACK benchmark runs on the top 500 supercomputers of those who submit their performance data.
While the focus of the TOP500 list is on the systems themselves, the ACM Gordon Bell Prize recognizes the scientists who push those systems to get the most scientific productivity out of them, with particular emphasis on rewarding innovation in applying high-performance computing to applications in science, engineering, and large-scale data analytics.

At SC16, six finalists will compete for this year’s prize. Three of those submissions are based on calculations performed on the newest No. 1 system on the TOP500 list, the Sunway TaihuLight machine in China. 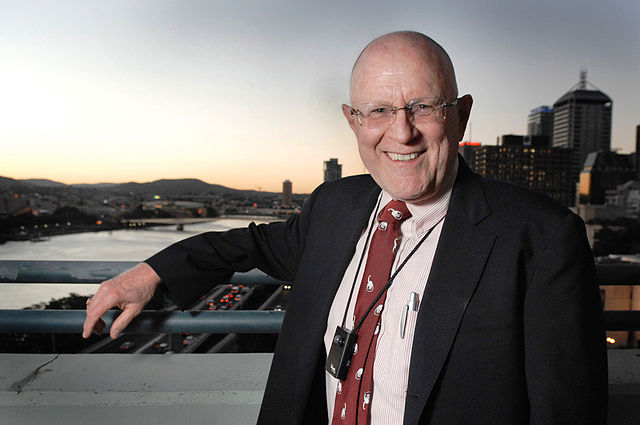 A recent photo of Gordon Bell – a long-time SC innovator/leader.

The Gordon Bell Prize, was created in 1987 by Gordon Bell, who rose to fame as a computer designer for Digital Equipment Corp. Prizes may be awarded for peak performance or special achievements in scalability and time-to-solution on important science and engineering problems. Financial support of the $10,000 award is provided by Bell and the recognition itself is highly valued by the scientists whose scientific applications push the sustained performance of leading edge supercomputers.

“Our community is fortunate to have the Gordon Bell Prize, because it documents scientific progress at the frontier of both supercomputing architectures and important computational science applications,” said Jeff Vetter, who leads the Future Technologies Group at Oak Ridge National Laboratory and was a member of the team that won the Gordon Bell Prize in 2010. In his 2013 book, “Contemporary High Performance Computing: From Petascale to Exascale,” Vetter wrote notes that the prize is “the most well-known scientific accomplishment” for HPC performance on real scientific problems.

Horst Simon, deputy director of Lawrence Berkeley National Laboratory, was a member of the teams that won the Gordon Bell Prize in 1988 and 2009. “I was absolutely elated to be a member of the winning team in 1988 – I was early in my career and thought that an award for parallel performance was a great idea,” Simon said of the 1988 prize, which still hangs in his office. “I was fortunate to be in a great group at Boeing and be part of a great team at NASA. The award came at a time when parallel computing was a hot topic and it was a great career boost – it established my credentials in HPC.”

Simon has continued to add to those credentials, including serving as one of four editors of the twice-yearly TOP500 list, which was created in 1993.

But the Gordon Bell Prizes also provide insight into how scientific computing capabilities have changed over the years. The prizes for peak performance usually go to researchers using the world’s fastest supercomputer at the time. For example, the 1998 winning team got access to a 1,024 processor Cray T3E that was still on the factory floor in Chippewa Falls.

With the debut of the Earth Simulator in 2002, teams running applications on the system took home the Gordon Bell Prize for peak performance in 2002, 2003 and 2004. A similar pattern ensued when BlueGeneL ended the Earth Simulator’s dominance in late 2004. At SC16, several of the Gordon Bell Prize entries are based on results from the Sunway TaihuLight machine in China that grabbed the top spot on the latest TOP500 list in June.

Interestingly, though, despite the importance of the prize in the HPC community, there is no comprehensive list of winners online. But there are pieces. For SC2000, Blaise Barney of Lawrence Livermore National Laboratory compiled a list of all winners from 1987 to 1999, even noting that no prize was awarded in 1991.

Starting in 2006, ACM began co-sponsoring the prize and maintains a list of “ACM Gordon Bell Prize” winners from 2006 to the present, with links to the award papers. But for 2000? 2001? Up to 2005? It’s an online scavenger hunt – and an omission that even Wikipedia hasn’t addressed.

However, thanks to the efforts of SC communicators and awards chairs, the information was recorded and virtually squirreled away on conference websites. By digging through old press releases and awards list, we have come up with the list below.

No doubt there may be are some errors/omissions and in the interest of historical accuracy, we welcome any corrections and the sources. Please send them to communications@info.supercomputing.org

Speedup
First Place: Mark T. Jones and Paul Plassmann, Argonne National Laboratory; “Large, sparse linear system solver that enabled the solution of vortex configurations in superconductors and the modeling of the vibration of piezo-electric crystals,” 4 Gflops on an Intel Touchstone Delta. Speedups between 350 and 500.

Peak Performance
James N. Glosli, David F. Richards, Kyle J. Caspersen, Robert E. Rudd and Frederick H. Streitz, all of Lawrence Livermore National Laboratory; and John Gunnels of IBM Watson Research Center; “Extending Stability Beyond CPU Millennium: A Micron-Scale Simulation of Kelvin-Helmholtz Instability.” The team that won the 2005 Gordon Bell Prize for a simulation investigating the solidification in tantalumand uranium at extreme temperatures and pressure, with simulations ranging in size from 64,000 atoms to 524 million atoms, used an expanded machine to conduct simulations of up to 62.5 billion atoms. The optimized ddcMD code is benchmarked at 115.1 Tflop/s in their scaling study and 103.9 Tflop/s in a sustained science run.
Award paper

Because of the unusually high quality of all of the ACM Gordon Bell Prize finalists, the committee took the unusual step of awarding Honorable Mentions to the remaining three finalists papers:
“Atomistic nanoelectronics device engineering with sustained performances up to 1.44 Pflop/s” by Mathieu Luisier et al.,
“Petaflop biofluidics simulations on a two million-core system,” by Simone Melchionna et al., and
“A new computational paradigm in multiscale simulations: Application to brain blood flow,” by Leopold Grinberg et al.

Scalability and Time to Solution
Tomoaki Ishiyama, Keigo Nitadori, University of Tskuba; and Junichiro Makino, Tokyo Institute of Technology; “4.45 Pflops astrophysical N-body simulation on K computer: the gravitational trillion-body problem,” The average performance on 24576 and 82944 nodes of K computer are 1.53 and 4.45 Pflop/s, which correspond to 49% and 42% of the peak speed.
Award paper